In a world where infrastructure built 50 years ago is being asked to serve modern requirements for 50 more. AFT can provide reliable data where construction documentation may not be adequate. Our specialty engineers employ the newest and best tools available and evaluate existing foundations concerning the number of years since they were built.

In response to FHWA memorandums on scouring critical bridges across the nation, we have worked under multiple county and state agencies. This procedure is to evaluate foundation lengths and integrity for hundreds of existing structures, including:

AFT provides expert Non-Destructive Testing (NDT) services when it comes to the need to determine the lengths of unknown foundations for bridges, building structures, walls, or utility towers. Having knowledge of foundation lengths that are in service under a structure is essential in assessing the useable life, need for scour protection, retrofitting, or full reuse of existing foundations. AFT employs a number of technologies to help you with this evaluation including:

NDT experts worldwide as well as our own FHWA have expended a great deal of research energy looking at the best test methods to obtain the needed foundation data for evaluation of existing structures foundations. Parallel Seismic Testing (PST), of all NDT methods, is universally recognized to most accurately indicate foundation lengths for the broadest range of substructure types and subsurface geologic conditions (FHWA, 1998).

For a Parallel Seismic Test (PST), first a borehole and PVC casing are installed adjacent to the foundation under test as illustrated below. 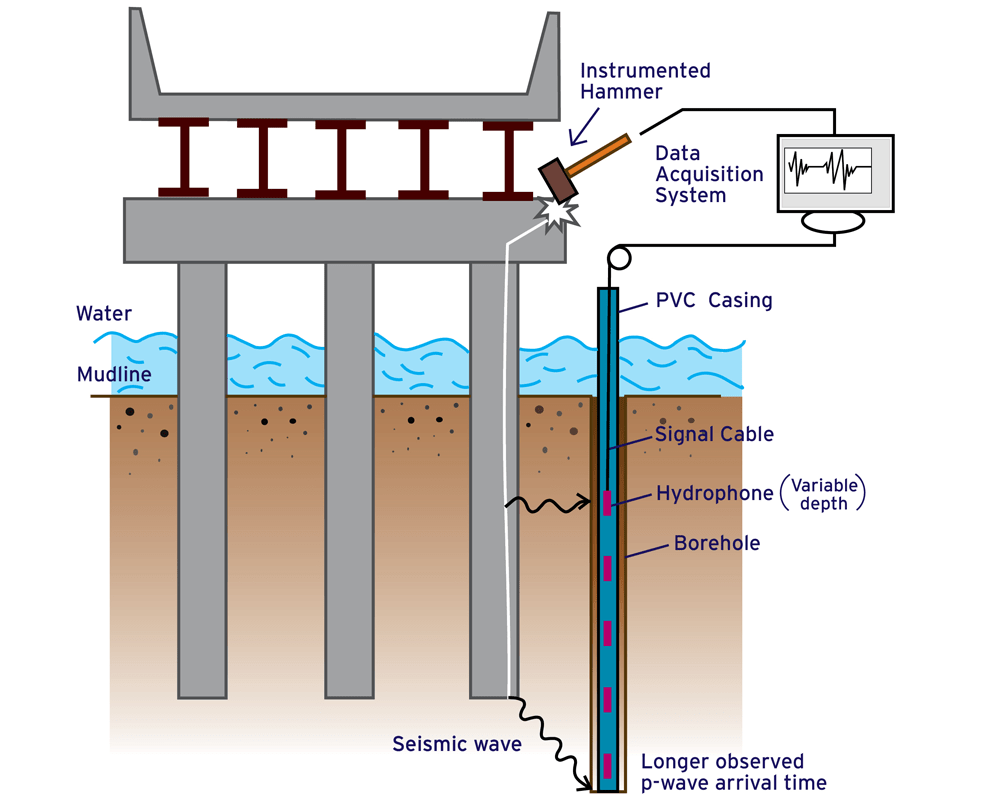 Testing is conducted by impacting a part of the substructure, which is structurally coupled to the foundation, with an instrumented hammer to generate shear waves (S-wave) and pressure waves (P-wave), which travel down the foundation and are refracted to the surrounding soil. Refracted P-waves are received by a hydrophone in the water filled PVC cased borehole. The testing procedure starts with the hydrophone at the bottom of the borehole and is raised at 1-foot intervals after a set of three impacts are received for each depth interval. The received P-waves are recorded at every foot to generate the time-versus-depth profile. Based on the first arrivals of P-waves, a pile tip is determined corresponding to the inflection point of two fitted slopes as illustrated in the analyzed data set below. 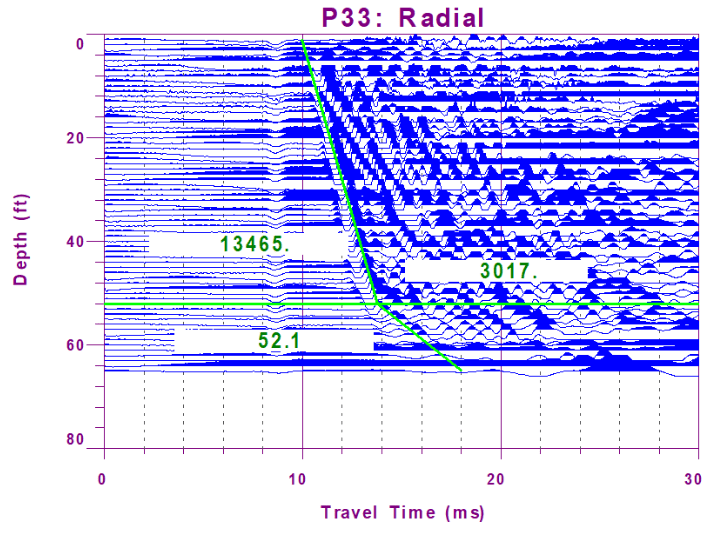 Sometimes it is also desired to determine the in-place geotechnical resistance of existing foundations in conjunction with a PST study. AFT offers full scale static, Statnamic, and dynamic load testing when this need arises.